Founded by former Oracle executive Marc Benioff, Salesforce quickly grew into one of the largest companies in the world, making its IPO in 2004. Salesforce’s continued growth makes it into the first cloud computing company to reach US$1 billion in annual revenue by fiscal year 2009,[2] and the world’s largest enterprise software firm by 2022.[3]

Today, Salesforce is one of the largest technology companies in the world, and as of September 19, 2022, is the 61st largest company in the world by market cap with a value of nearly US$153 billion.[4] Salesforce ranked 136th on the most recent edition of the Fortune 500, making US$26.5 billion in 2022.[5] Since 2020, Salesforce has also been a component of the Dow Jones Industrial Average. 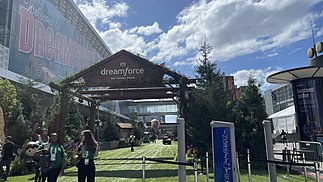 The company was founded in 1999 by former Oracle executive Marc Benioff, together with Parker Harris, Dave Moellenhoff, and Frank Dominguez as a software as a service (SaaS) company.[7][8] Two of Salesforce’s earliest investors were Larry Ellison, the co-founder and first CEO of Oracle, and Halsey Minor, the founder of CNET.[8]

Salesforce was severely affected by the dot-com bubble bursting at the beginning of the new millennium, with the company laying off 20% of its workforce. Despite its losses, Salesforce continued strong during the early 2000s. Salesforce also gained notability during this period for its tagline “the end of software”, in which it also hired actors to hold up signs with its tagline outside a Siebel Systems conference.[9] Salesforce’s revenue continued to increase from 2000 to 2003, with 2003’s revenue skyrocketing from $5.4 million in fiscal year 2001 to over $100 million by December 2003.[2]

Also in 2003, Salesforce held its first annual Dreamforce conference in San Francisco.[10] In June 2004, the company had its initial public offering on the New York Stock Exchange under the stock symbol CRM and raised US$110 million.[11][12] In 2006, Salesforce launched IdeaExchange, a platform that allows customers to connect with company product managers.[13]

In 2009, Salesforce passed $1 billion in annual revenue.[8] Also in 2009, the company launched Service Cloud, an application that helps companies manage service conversations about their products and services.[14]

In 2019, Salesforce joined the Dow Jones Industrial Average, replacing energy giant and Standard Oil-descendant ExxonMobil. Salesforce’s ascension to the Dow Jones was concurrent with that of Amgen and Honeywell.[6] Because the Dow Jones factors its components by market price, Salesforce was the largest technology component of the index at its accession.[19]

Across 2020 and 2021, Salesforce saw some notable leadership changes, In February 2020, co-chief executive officer Keith Block stepped down from his position in the company.[20] Marc Benioff remained as chairman and chief executive officer.[21] In February 2021, Amy Weaver, previously the chief legal officer, became CFO. Former CFO Mark Hawkins announced that he would be retiring in October.[22][23] In November 2021, Bret Taylor was named vice chair and co-CEO of the company.[24]

On December 1, 2020, it was announced that Salesforce would acquire Slack for $27.7 billion, its largest acquisition to date.[25] The acquisition closed on July 21, 2021.[26] Journalists covering the acquisition emphasized the price Salesforce paid for Slack, which is a 54% premium compared to Slack’s market value, as too high of a premium for the company, with views varying from the premium being too concerning for investors to Salesforce playing the long game.[27][28][29]

On August 24, 2022, Salesforce reported second quarter earnings of $7.72 billion. Upon the German software firm SAP reporting its earnings for the same quarter totaling to €7.52 Billion,[a] Acceleration Economy reported that Salesforce had surpassed SAP to become the world’s largest enterprise software vendor. This mirrored Benioff’s remarks in Salesforce’s earnings call, where he stated he looked at “this quarter very much as kind of a milestone”.[3]

Salesforce announced a partnership with Meta Platforms in September 2022. The deal called that Meta’s consumer application WhatsApp would integrate Salesforce’s Customer 360 platform to allow consumers to directly communicate with companies.[30]

In November 2022, Salesforce announced it would terminate employees in its sales organization.[31] Protocol reported that the company would likely eliminate some 2500 jobs.[32]

Salesforce Platform[37] (formerly known as Force.com) is a platform as a service (PaaS) that allows developers to create add-on applications that integrate into the main Salesforce.com application.[38][failed verification] These third-party applications are hosted on Salesforce.com’s infrastructure.[39]

Force.com applications are built using declarative tools, backed by Lightning[further explanation needed] and Apex, a proprietary Java-like programming language for Force.com,[40] as well as Visualforce, a framework[41] including an XML[42] syntax typically used to generate HTML. The Force.com platform typically receives three complete releases a year.[43] As the platform is provided as a service to its developers, every single development instance also receives all these updates.

In 2015, a new framework for building user interfaces – Lightning Components – was introduced in beta.[44] Lightning components are built using the open-source Aura Framework[45] but with support for Apex as the server-side language instead of Aura’s JavaScript dependency. This has been described as an alternative to, not necessarily a replacement for, Visualforce pages.[46]

Lightning Base Components is the component library built on top of Lightning Web Components.[48]

Launched in 2005, the Salesforce AppExchange is an online application marketplace that connects customers with third-party applications and consulting services.[49][50] As of 2021, the exchange has over 5,000 apps listed.[51][52]

Launched in 2014, Trailhead is a free online learning platform with courses focused on Salesforce technologies.[53][54][15]

In August 2021, during the COVID-19 pandemic, Salesforce launched a streaming service titled Salesforce+[b]. The service features original content produced by the company involving its clients ranging from “days in the life” of smaller business owners to interviews with large companies’ CEOs. Since 2022, Salesforce has also streamed its annual Dreamforce conference on Salesforce+.[55][56] 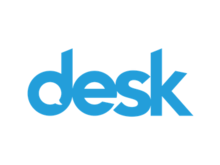 Desk.com is a SaaS help desk and customer support product that was acquired by Salesforce for $50 million in 2011.[57] The product focused on connecting small businesses to their customers.[57][58]

In March 2018, Salesforce announced that Desk.com would be consolidated with other services into Service Cloud Essentials.[59]

Salesforce is headquartered in San Francisco in the Salesforce Tower.[63] Salesforce has international offices in Hong Kong, Israel, and Sydney.[64] 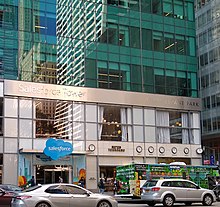 According to Marc Benioff, Salesforce corporate culture is based on the concept of Ohana.[66]

In 2021, Cynthia Perry, a design research senior manager, resigned over discrimination in the workplace and posted her resignation letter on LinkedIn.[67][68]

On September 10, 2021, Benioff tweeted that the company is prepared to help any employee who wishes to move out of the state of Texas, following the abortion in Texas legislation announced on September 1, 2021.[69]

In 2012, Salesforce announced plans to build a data center in the UK to handle European citizens’ personal data.[74] The center opened in 2014.[75]

In 2013, Salesforce and Oracle announced a nine-year partnership focusing on applications, platforms, and infrastructure.[76]

In 2016, Salesforce announced that it will use Amazon Web Services hosting for countries with restrictive data residency requirements and where no Salesforce data centers are operating.[77]

Salesforce has acquired many companies throughout its history.

In 2016, Salesforce spent over $5 billion in acquisitions.[97] Companies acquired included Demandware, a cloud-based provider of e-commerce services, for $2.8 billion[98] and Quip, a word processing app, for $750 million.[99] In 2017, the company acquired Sequence, a user experience design agency, for an undisclosed amount.[100] In 2018, Salesforce acquired several companies, including MuleSoft, a cloud service company, for $6.5 billion,[101][102] as well as Rebel, an email services provider,[103] and Datorama, an AI marketing platform, for undisclosed amounts.[104]

From 2019 to 2021 saw Salesforce make two of its largest acquisitions, with Salesforce completing its acquisition Tableau, a data visualization and analytics software company, for $15.7 billion[105] in 2019, and Slack Technologies, the developers of its namesake office messaging platform, for $27.7 billion in 2021.[106] Salesforce also made smaller acquisitions throughout 2019, 2020, and 2021, which included ClickSoftware for $1.35 billion,[107] consulting firm Acumen Solutions for $570 million,[108] CRM firm Vlocity for $1.33 billion,[20] privacy compliance startup Phennecs for $16.5 million,[109] and robotic process automation firm Servicetrace for an undisclosed amount.[110]

Salesforce’s most recent acquisition was Slack-bot maker Troops.ai, announced in May 2022 and expected to close in 2023.[111]

Subject to a phishing attack

In November 2007 a phishing attack compromised contact information on a number of Salesforce customers. Some customers then received phishing emails that appeared to be invoices from Salesforce.[112][113] Salesforce has stated that “a phisher tricked someone into disclosing a password, but this intrusion did not stem from a security flaw in [the salesforce.com] application or database.”[112]

In 2017 at DEF CON, two security engineers were let go after giving a presentation on an internal project called MEATPISTOL.[114] The presenters were sent a message 30 minutes prior to the presentation telling them not to go on stage, but the message wasn’t seen until after they finished.[114][115] The MEATPISTOL tool was anticipated to be released as open-source at the time of the presentation, but Salesforce didn’t release the code to developers or the public during the conference.[114] The terminated employees called on the company to open-source the software after being let go.[116]

The not-for-profit organization Refugee and Immigrant Center for Education and Legal Services (RAICES) rejected a US$250,000 donation from Salesforce because the company has contracts with U.S. Customs and Border Protection.[117]

In December 2019, the Institute on Taxation and Economic Policy found that Salesforce was one of 91 companies who “paid an effective federal tax rate of 0% or less” in 2018, as a result of the Tax Cuts and Jobs Act of 2017. Their findings were published in a report based on the 379 Fortune 500 companies that declared a profit in 2018.[118]

In March 2019, Salesforce faced a lawsuit by 50 anonymous women claiming to be victims and survivors of sex trafficking, abuse, and rape. The suit alleges that the company profited from and helped build technology that facilitated sex trafficking on Backpage.com, a now defunct website.[119] In March 2021, a judge granted partial dismissal of the case, dismissing charges of negligence and conspiracy, but allowed the case to proceed regarding charges of sex trafficking.[120]

In July 2021, Salesforce Japan faced a discrimination lawsuit from a former employee, according to Japanese legal media,[121] at a time when the firm has been publicly challenged about its commitment to equality. The firm declined to comment on the suit to the media. The ex-employee, who has Autism Spectrum Disorder and ADHD, claimed she was discriminated against because of her disability and terminated in the firm’s Japan web marketing team. The suit alleged that the anonymous woman, as an employee at Salesforce Japan from 2018 to 2020, faced hate speech, microaggressions and rejection of reasonable accommodation from the manager. She alleged that her attempts to resolve the problem were met with pressure from HR and job coach. The lawsuit started on September 15 in Tokyo district court. The 8th trial will open on November 14, 2022.[122][123]